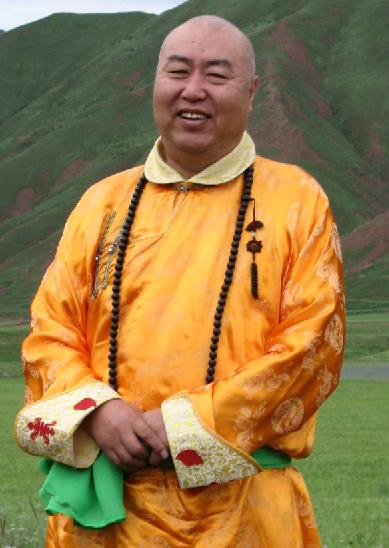 Dechan Jueren (Attained Zen Awakened Man) is The MahaVairocana Dharma King, the 49th Mahacharya, the Dharma Lineage Holder of the Esoteric School (where Shingon and Reiki has its root).

Dechan Jueren is the 47th Lineage Holder of the Linji Chan Buddhism (where Rinzai Zen comes from).

Dechan Jueren is a Traditional Chinese Medicine doctor, and is acknowledged as a Living Buddha in China.

Dechan Jueren, Master Yu Tianjian, from Chaoyang, Liaoning Province, at the age of 39, attained self-realization under the guidance of the 48th Mahacharya of the Esoteric School, Grandmaster Huiling of Putian, Fujian Province.

Dechan Jueren sees the past, the present and the future, and understands his mission as the Dharma Lineage Holder. He resigned his position as a plant manager in China, and donated all his savings of over one million RMB to the cause of reviving Buddha-Dharma. He said, “I want to let people know the truth of the Buddha-Dharma again.” He experienced all kinds of hardship as he journeyed over great rivers and mountains in order to transmit Dharma and to heal people. He has left indelible impressions everywhere he traveled.

In 1989, a discovery was made in the heaven palace of the North Pagoda at Chaoyang City, Liaoning Province. They found sharira, or the bone relic of the Buddha himself, sutra and tantra engraved in silver plates in Chinese, two Chinese Stupas of the Vajradhatu and the Garbhadhatu, and the Stupa of the Five Wisdom Buddhas.

Later, a mandala of The Esoteric School was also discovered in the crypt, the earth palace, of Famensi, or Dharma Doorway Temple at Fufeng County, Shaanxi Province. These discoveries predict the revival of the Esoteric School.

“I am MahaVairocana Dharma King. I received the lineage from Mahacharya Huiling of Esoteric Buddhism. The initiation took place at Zhaojue Monastery in Sichuan, China, with the renowned Master Qingding as the witness. I received all and every dharma instrument, sutra, tantra, robe, and crown of Subhakarasimha, Vajrabodhi and Amoghavajra. I am the sole lineage holder.

I began transmitting dharma to the public since 1990 in order to reveal the exquisite spirit of Esoteric Dharma that was hidden for more than a thousand year. He who comes in contact with it shall grasp the method of knowing oneself and will be able to apply the means of changing oneself.

By letting people to discover the existence of one’s bad root-nature and by applying the how-and-what-to-do so as not to allow the bad root-nature to rise again, then the beast nature can be withered. Only so can we let people to liberate themselves from their self-limitation and the restriction of the environment’s condition.

Only when people have grasped these methods, then they would no longer limit themselves. This is the method to “expose the truth of appearance”. Thus, people shall really know the method to break through the form of the ego, of the human, of all living beings and of the long-life ones.

The method can make people really see the ignorance, attachment, and limitation of a human life that brought to oneself every suffering. Only when he who has truly grasped and applied such dharma, he will be able to liberate himself from suffering”– Dechan Jueren.

Dechan Jueren visited Los Angeles for the first time to attend the International Association of Integrated Medicine at the University of Southern California on July 26, 1998. His thesis on calcium enrichment through meditation practice won the Golden Award.

On April 1, 1999, The Dari Rulai Temple was founded as the seat of MahaVairocana Dharma King.

Dechan Jueren attended the United Nations Millennium World Peace Summit of Religious and Spiritual Leaders. He was appointed as a Special Advisor of the World Council of Religious Leaders in 2007.

Though Dechan Jueren left his body in 2011, many who practice the meditation and healing techniques of the Chinese Esoteric School (Hanmi), whether newcomers or long time practitioners, feel his empowerment as they meditate, help themselves, and help others. Many have experienced his visit and blessing in their dreams, and some report hearing his voice and guidance, or seeing him while awake.